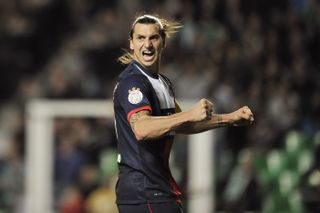 The Ligue 1 club have won each of their three Group C fixtures so far, scoring a total of 12 goals and conceding just one.

However, the scorer of six of those goals - Zlatan Ibrahimovic - remains a doubt for the visit of the Belgian champions after a short spell on the sidelines with inflammation of the knee. That said, an on-court kickabout with tennis star Novak Djokovic at the Paris Masters on Saturday suggests he is on the road to recovery.

Laurent Blanc's side hammered Anderlecht 5-0 in the reverse fixture a fortnight ago, leaving John van den Brom's men bottom of the group with no points and no goals.

On the subject of goals, Anderlecht were the second-lowest scorers in last season's competition.

Defeat in Tuesday's fixture, combined with a victory for either side in the meeting between Olympiacos and Benfica, would leave Anderlecht unable to qualify for the next round.

In contrast to the Belgian club's poor strike rate, PSG are five away from scoring 100 European Cup goals and will feel they have chance of reaching that milestone against Anderlecht following their sensational display at the Constant Vanden Stock Stadium.

The French champions currently sit atop Ligue 1 and have not lost in the competition since March 2 when they fell to a 1-0 defeat at the hands of Stade de Reims, which is also the last time they failed to score.

To make matters worse, top scorer Matias Suarez has been ruled out for the rest of the season with a cruciate knee ligament injury sustained in training. Guillaume Gillet could also miss Tuesday's encounter after suffering a gashed knee in a 1-1 draw with Standard on October 27.

Thiago Silva is back in training for PSG following a hamstring injury, but is unlikely to be risked on Tuesday.