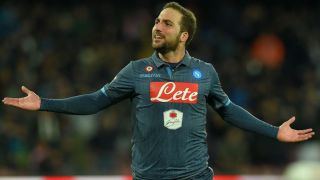 The Argentine forward proved too hot to handle for the visitors as he netted his first European treble against a Dynamo side reduced to 10 men early in the second half after Roman Zobnin's dismissal.

Kevin Kuranyi's fifth Europa League goal of the season had given Dynamo an ideal start two minutes in, although Higuain levelled with an expert header before the half-hour mark.

The Argentina international then put Napoli on top as he converted a 31st-minute penalty.

Zobnin saw red early in the second half to dent Dynamo's hopes of a fightback and Higuain added a third against the Russian Premier League side five minutes short of the hour.

While Stanislav Cherchesov's side will take comfort from their away goal, Higuain's first-leg heroics may yet prove enough to take Napoli through going into the return encounter next week.

Napoli had built up a record five consecutive Europa League clean sheets prior to Thursday's clash, but fell behind as Kuranyi powered Mathieu Valbuena's corner past Mariano Andujar.

While the hosts almost levelled through Jose Callejon's header, Napoli's early woes continued when Kalidou Koulibaly was forced off injured.

Dries Mertens somehow failed to convert a cross from the left before Kuranyi headed over the crossbar in a lively opening 20 minutes.

Napoli did draw level prior to the break, however, as Higuain took his tally for the season to 21 with a glancing header off Faouzi Ghoulam's delivery.

Aleksei Kozlov's foul on Mertens then allowed Napoli to take the lead as Higuain made no mistake from the spot.

The balance of power continued to shift Napoli's way after the break when Zobnin was shown a second yellow card for a late challenge on Ghoulam.

The Serie A side began to put clear daylight between themselves and their opponents as Higuain chested the ball, turned and finished inside the area to ensure an end to Dynamo's unbeaten run in this season's competition.

Christopher Samba's looping header almost allowed Dynamo back into the game, but his effort ended up nestling on the roof of the net, with Higuain's quality proving the difference as Napoli took a big step towards their first UEFA quarter-final since 1988-89.