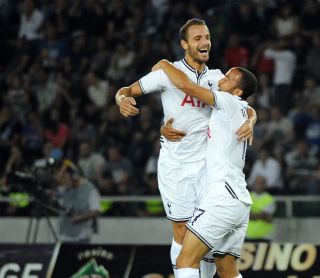 The 22-year-old finished the match with a goal and two assists, as Tottenham left themselves in a strong position to qualify for the UEFA Europa League group stages with a commanding display.

Townsend opened the scoring with a fine solo goal before providing a pin-point cross for Paulinho to make it 2-0 before half-time.

And Spurs pressed home their dominance after the break as Roberto Soldado netted either side of a fine Danny Rose effort.

Andre Villas-Boas handed a full debut to Etienne Capoue, while fellow signings Paulinho and Soldado were named in a strong starting XI.

The Georgian outfit looked to make home advantage count in the early stages and they had the ball in the back of net in the sixth minute but were denied as Xisco had strayed offside on the left flank.

As Tottenham began to settle they started to enjoy the majority of possession and the away side took the lead with a fine counter-attacking move.

A Tbilisi corner was cleared by Gylfi Sigurdsson before Townsend took ownership in midfield. He sprinted from inside his own half before striking hard into the bottom right-hand corner from 25-yards.

Tottenham continued to press but they had Hugo Lloris to thank for keeping the scores level on 25 minutes. Davit Kvirkvelia crossed from the left and Jaba Dvali diverted the header goalwards but the Frenchman got a strong hand to the effort to send the ball out for a corner.

Xisco was withdrawn for Tbilisi with what looked like a hamstring injury, and their situation worsened when Tottenham made it 2-0 in the 43rd minute.

Townsend made progress down the right before cutting onto his favoured left foot and hanging his cross in the air where Paulinho had timed his run well to head beyond Giorgi Loria from eight yards out.

After a slow start to the second half Townsend once again lit up the tie by grabbing another assist in the 58th minute.

The winger showed electric pace to burst down the right-hand side to leave Oleg Gvelesiani trailing in his wake. He got to the byeline before laying the perfect pass to Soldado who coolly slotted home the third.

Two goals in as many minutes followed to leave the home side reeling.

First Nacer Chadli laid the ball into the patch of Rose who curled a stunning left-footed strike into the top right-hand corner from 25 yards.

And Chadli was involved again in the 67th minute when he crossed into the six-yard box for Soldado to tap home his second of the night.

Soldado was replaced by Harry Kane with 20 minutes remaining and the youngster almost grabbed a sixth when he headed against the post from Chadli's centre.

Villas-Boas may now take the opportunity to utilise the depth of his squad when they host the return leg at White Hart Lane on Thursday August 29.