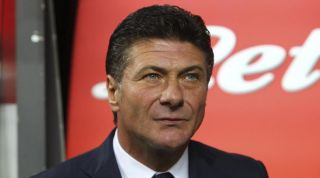 Inter - unbeaten and having kept clean sheets in all four of their competitive contests so far this season - head to Ukraine for their 350th European match fresh from a 7-0 thrashing of Sassuolo in Serie A on Sunday.

They will be expected to be among the leading contenders for Europe's second tier competition this season, but they face a Dnipro side who are also thriving.

Saturday’s admirable 5-2 win at Metalist in the Ukrainian Premier League took them to seven games undefeated in all competitions.

Portuguese playmaker Bruno Gama netted a treble in Kharkiv, while talisman Yevhen Konoplyanka marked his return from injury by coming off the bench to score an assist and a goal.

"We know we will play a formidable team who are internationally feared and respected," said Gama when asked about the challenge next up of facing the Italian giants in the Group F opener.

"It will be difficult, but if we play like we have been in the league we can do it."

Another side hoping to avoid an upset is Sevilla, who begin their title defence by hosting Feyenoord.

Tricky winger Aleix Vidal and prolific striker Carlos Bacca have helped the Spaniards to make a flying start to 2014-15.

Feyenoord, by contrast, are winless in four Eredivisie matches, and have lost five and drawn one of their last six Europa League outings.

Standard Liege, who are expected to battle with Feyenoord for runners-up spot in Group G, start out at home to Rijeka while outsiders Qarabag welcome Saint-Etienne to Azerbaijan in Group F’s other fixture.

Fiorentina, Napoli and Torino are also hoping to become the first Italian team since Parma in 1999 to conquer the Europa League.

The Florentine outfit are at home to French side Guingamp, with PAOK hosting Dinamo Minsk in Group K's other game.

Napoli will strive to put a difficult start to 2014-15 behind them at home to Sparta Prague, with Young Boys and Slovan Bratislava also competing in Group I.

Torino, who have struggled for goals since the departures of Alessio Cerci and Ciro Immobile, are away to Club Brugge, as group rivals Copenhagen and HJK meet in a Scandinavian affair.

Mauricio Pochettino is likely to rotate his Tottenham squad in Belgrade, with Andros Townsend and Harry Kane among those expected to start.

Besiktas versus Asteras is the other game in Group C.

Group H is arguably the most wide open. Everton entertain Wolfsburg, who have failed to win in four competitive matches this season, while Krasnodar visit Lille.

Group L is another unpredictable pool with Metalist and Legia Warsaw at home to Trabzonspor and Lokeren respectively.

Group E offers up PSV-Estoril and Panathinaikos against Dinamo Moscow.

Red Bull Salzburg open their Group D challenge against Celtic, the Scottish champions having dropped down to the Europa League after two unsuccessful attempts in the Champions League, having been reinstated following Legia Warsaw's exclusion for fielding an ineligible player.

Zurich are away to Apollon Limassol in the pool's remaining fixture.