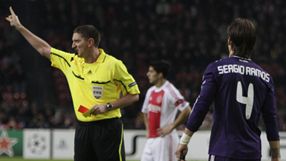 Real later issued a statement on their website saying: "Real Madrid expresses its surprise at this decision on the understanding that it does not conform with UEFA's disciplinary rules".

Spain internationals Ramos and Alonso were dismissed late in Tuesday's 4-0 away win in the Dutch capital after picking up second yellow cards for time-wasting.

The sendings-off meant they would serve automatic one-match suspensions in the final group game against Auxerre, which is a dead match for Real with the Spanish club already assured of first place in Group G and qualification for the last 16.

Both players had accumulated two yellow cards in the group stage before they were sent off and a further yellow card in a subsequent game would have meant a one-match suspension during the knockout stage.

A UEFA spokesman said they would now start the knockout stage with one yellow card each against their names as the cards picked up before the Ajax game would still stand.

Spanish media reports said the players were acting on instructions from Mourinho. They said the message was passed by reserve goalkeeper Dudek during a conversation with first choice keeper Casillas.

Spanish television has repeatedly replayed a moment during the match when the pair were seen talking with their hands over the mouths. Mourinho was also filmed with his hand over his mouth.

"There's no need to keep talking about this," Ramos told Real's website. "It's something which has been forgotten.

"It's time to turn over the page and think about the Clasico (match against Barcelona on Monday). I don't fear any sanction because I don't believe that I've done anything illegal."

Two years ago, UEFA fined Olympique Lyon players Cris and Juninho 15,000 euros and 10,000 euros respectively for getting deliberately booked during a Champions League match against Fiorentina.

UEFA's disciplinary panel decided that the pair had committed deliberate fouls in order to serve a one-match suspension during their team's meaningless final group stage match against Bayern Munich.