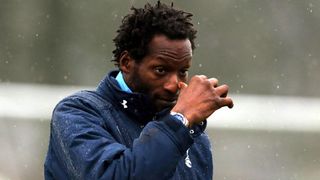 Tottenham announced on Friday that their Under-23 coach Ehiogu, 44, had passed away after suffering a cardiac arrest at the club's training centre a day earlier.

Eulogies have poured in for the former defender, with Southgate - who played alongside him for Aston Villa, Middlesbrough and England - calling Ehiogu "a credit to football".

"He was a gentleman and he is one of those characters that people would find it difficult to have anything bad to say about," Southgate said.

We're devastated to hear the news that Ugo Ehiogu has passed away.Our thoughts and sympathies are with all lucky enough to know him. April 21, 2017

"I probably played more games with Ugo than anybody else in my career and, while in many ways he was a gentle giant away from football, he was a colossus on the pitch. It felt like a true partnership with Ugo because we were prepared to put our bodies on the line for each other.

"We shared highs, lows and won a couple of trophies together with Villa and Boro and it's those memories that I will always cherish when I think of Ugo.

"He was one of the most professional people I played with in terms of how he applied himself to his job and it was great to see him progressing through the coaching pathway with that thirst for learning.

"I've spoken to several of our former team-mates today and there's just a sense of disbelief that we're having these conversations. Ugo was a credit to football, a credit to his family and he will be missed by everybody who was lucky enough to know him."

"All of the football world will be shocked and saddened," he told a pre-match news conference ahead of Villa's derby clash with Birmingham City, where they will hold a minute's applause.

"We've just had a couple in [the dressing room] who are devastated to hear the news."