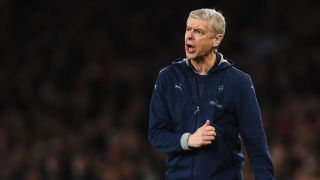 Wenger has long been an advocate for a deeper look into the scale of drugs in football.

In 2013, Wenger called for blood testing arguing they would provide greater transparency while claiming that sports was "full of legends who are in fact cheats".

The subject has come up more recently, when Dinamo Zagreb midfielder Arijan Ademi tested positive after his side's Champions League win over Arsenal.

Ademi was banned from football for four years as a result, leading the Arsenal manager to reiterate his desire to see blood tests used to detect drug cheats.

Now Sapstead is seeking a meeting with Wenger to hear more about his thoughts on doping in football, admitting she shares the Frenchman's suspicions.

"I think it’s foolish for any sport to think that they’re immune from doping, I really do," Sapstead said at a briefing in London on Wednesday.

"You’ve got a sport that commands huge salaries – players command huge salaries – there’s huge television rights. There’s a lot to be gained from doping, irrespective of looking at the physiological requirements of the game itself.

"Look at how the game is played, the recovery rate with injuries. Football, tennis, other sports: something doesn’t feel right."

Sapstead said it was unfair to criticise organisations like UKAD for not doing more to catch drug cheats in sport, saying the governments had to provide adequate resources to support the appropriate scale of action.

"You can’t sit there and criticise an organisation like us, with limited resources, that we’re not doing enough," she said.

"Because people like Lance Armstrong and Marion Jones show you can test people until you’re blue in the face and you still won’t catch them because they had a network behind them that was so much more sophisticated than what we’re able to achieve right now."