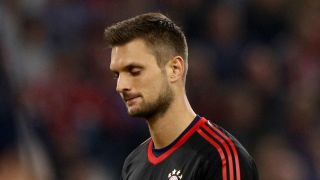 Sven Ulreich has apologised for an error which cost Bayern Munich a win against Wolfsburg, with senior team-mates Thomas Muller and Mats Hummels offering the goalkeeper their support.

Manuel Neuer's broken foot means Ulreich will deputise in the Bundesliga champions' goal for the remainder of the year and, after keeping a clean sheet at Schalke, his efforts were less successful on Friday.

With Bayern 2-0 to the good, Ulreich allowed Max Arnold's dipping free-kick through his grasp, with Wolfsburg snatching a point thanks to Daniel Didavi's goal seven minutes from time.

The draw keeps Bayern in second place behind Borussia Dortmund and Ulreich held his hands up for the error.

"I made the wrong decision," he told reporters. "The ball fluttered. I wanted to tip it over the crossbar as it looked like the ball would arrive a bit higher. Then I did not use my second hand.

"It was a clear goalkeeper mistake. I'm sorry for the lads and the team."

Bayern face a tough trip to face Paris Saint-Germain in a blockbuster Champions League clash on Wednesday, and Muller backed Ulreich to bounce back against Neymar, Edinson Cavani, Kylian Mbappe and co.

Muller said: "Of course he'll worry about it. But as I know Ulle, he won't play with shaky hands in Paris.

"The team supports him. And if you see him in training, nobody has to be worried."

Hummels added his support: "I've played against him since I was 12 years old. Everyone makes mistakes.

"Sven played superb at Schalke, as well before this season. It's annoying but that happens."