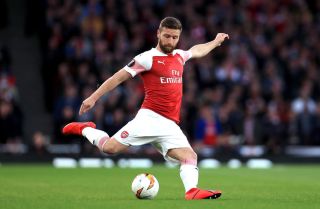 Unai Emery has admitted to holding talks with Shkodran Mustafi about a potential move away from the club.

The Germany international remains the most expensive defender in the club’s history but has received criticism from some quarters ever since joining from Valencia in 2016.

The 27-year-old was jeered by a minority of fans as he came off the bench during the Emirates Cup defeat to Lyon and has been linked with a transfer for most of the summer.

While the Premier League transfer window closed on Thursday – with Arsenal bringing in two defenders in full-back Kieran Tierney and David Luiz from Chelsea – most of the major European leagues have until September 2 to land their targets, meaning Mustafi could be on the move.

“I spoke with him when we finished last season,” Emery said of Mustafi.

“But I don’t have doubts if he needs to play because he is a good player. Maybe we decided to be more competitive in each position, at centre-back with David Luiz, with another player in the middle with (Dani) Ceballos, with Kieran Tierney, with (Nicolas) Pepe.

“I think being more competitive we can respond better in the season. Some players maybe they can play less with that situation and can leave.

“But it’s one decision taken with the player, with the club, with the team. At the moment he is here and really if we need, he plays with us. I have confidence he will do well.

“Some supporters can believe or like one player more than another player, that’s normal.

“But inside I want to be strong and to create a big squad with a big, competitive, winning mentality and above us, with confidence in each other.”

Mustafi is unlikely to feature for the Gunners in their Premier League opener at Newcastle on Sunday despite the fact Luiz may not be ready to come in to the side to make his debut as he awaits international clearance.

The 32-year-old joined from London rivals Chelsea for a reported fee of £8million and, despite receiving similar criticism to Mustafi in recent years, Emery is certain Arsenal have landed a quality defensive option.

“Last year he (Luiz) won the Europa League and he played every match in the Premier League,” he said.

“It is very difficult to find something negative from him. There is a lot more positive things to help us.”

💬 "I’m here to give everything and to try to make this club arrive where it deserves to arrive – winning big games and big titles."@DavidLuiz_4 has a message for you all – and we reckon you're going to like what he's got to say! 💪— Arsenal (@Arsenal) August 9, 2019

Emery worked alongside Luiz for a spell while in charge at Paris St Germain but played down any suggestion that the Brazil international could be one of his five allotted captains at the Emirates Stadium.

“It’s difficult,” he said when asked if Luiz would be considered.

“I think we have the possibility inside with players with more circumstances to achieve my decision for a captain.

“But he has experience to use not with the armband but he can still help the young players with his experience. Not like one of the five captains, but doing that.”