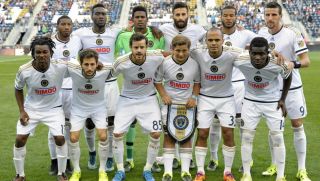 Having already added pieces to the Philadelphia Union attack, new sporting director Earnie Stewart has turned his attention to the back line.

The Union announced the signing of center back Anderson Conceicao on Wednesday, acquiring the 26-year-old on a season-long loan from Brazilian side Tombense.

Conceicao spent 2015 on loan to America Mineiro, making 30 appearances while helping the club achieve promotion to the top flight. The 6-foot-2 Brazilian also has had a stint in La Liga, playing 19 matches for Mallorca during the 2012-13 campaign.

"Anderson's natural athletic ability and winning pedigree was really something we zeroed in on during our offseason assessment," Stewart said in a news release. "He's the type of defender who really addresses some of our technical needs and we strongly believe we're getting someone who is committed to helping build the next chapter of our club."

Philadelphia found itself in need of center back help this offseason after declining the option on Steven Vitoria and trading Ethan White to New York City FC.