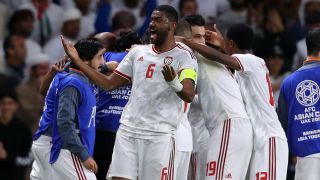 Defending champions Australia crashed out of the 2019 Asian Cup in the quarter-finals after losing 1-0 to hosts United Arab Emirates, with Milos Degenek's second-half error proving costly.

Neither side truly stood out in an even contest, but a hapless defensive error with 22 minutes to go allowed Ali Ahmed Mabkhout to score the winner and set up a semi-final with Qatar.

Although the Socceroos made a lively start, UAE improved as the first half progressed and ultimately crafted the better chances.

UAE's productivity in the final third had little to do with what proved to be the winning goal, however, as Degenek gifted them the chance and Mabkhout took full advantage.

It was a particularly sweet win for UAE, who were defeated by Australia in the semi-finals four years ago.

Australia almost made a flying start, but Trent Sainsbury headed over from eight yards despite being unmarked in the fourth minute.

UAE went close to capitalising halfway through the first period, only for Mat Ryan to make an important block to deny Ismail Al Hamadi after a darting run into the box.

Australia had an even luckier escape on the stroke of half-time – Mabkhout sending a powerful header just over the bar when he looked certain to score.

The Socceroos upped the ante after the interval and went close a couple of times – the lively Chris Ikonomidis shooting wide from Aziz Behich's cross just after the hour.

And UAE took advantage a few moments later, as Mabkhout pounced on Degenek's feeble back-pass, skipping past Ryan and slotting into the empty net.

The game stretched into the 101st minute due to several UAE players going down with injuries, but Australia could not use that to their benefit, as Alberto Zaccheroni's men held on.

What does it mean? A backwards step for Australia

After failing to get out of the group at last year's World Cup, this tournament was supposed to give Australia the chance to steady the ship with new coach Graham Arnold. However, instead of laying a marker of what is to come, they have failed to even reach the last four, which surely would have been the minimum expectation.

Ikonomidis a rare source of craft

In a match that was lacking in quality, Ikonomidis was the standout player for his consistently high level of deliveries. He provided four key passes and six good crosses – no one else on the pitch compared in that sense.

Even if he argued it was his only lapse in concentration in the whole game, it proved to be absolutely vital, as Degenek's pass back towards Ryan let UAE score the goal to take them into the semis. There was no way back from that for the defender.

While it is onwards to the semi-finals - and potentially the final - for host nation UAE, Australia are heading home early.