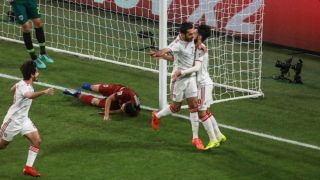 Asian Cup hosts United Arab Emirates are through to the knockout phase of the competition as Group A winners despite stuttering to a 1-1 draw with Thailand on Monday.

Alberto Zaccheroni's men looked the more competent side technically for much of the game, yet they struggled to craft clear-cut chances and a spirited Thailand side claimed a deserved point to see them progress in second place.

Ali Mabkhout put UAE ahead early on and they remained the controlling force for much of the first period, only for Thailand to hit back through Thitipan Puangchan just before the interval.

The game became tighter after half-time as opportunities dried up at both ends, though it mattered little as both sides progressed, with third-placed Bahrain also going through after their last-gasp 1-0 win over India.

It took UAE just seven minutes to break the deadlock, as Ismail Al Hamadi saw his strike come back off the crossbar after darting into the box, with Mabkhout nodding in the rebound.

Although UAE played the better football, Thailand looked a threat and went close with 21 minutes played – goalkeeper Khalid Eisa Bilal getting down well to keep Adisak Kraisorn's effort out.

But the equaliser did arrive just before half-time, as Puangchan made the most of some poor defending and slotted home from close range after initially having a flicked attempt saved.

UAE started the second half brightly, with Mabkhout forcing Sivarak Tedsungnoen into a save less than a minute after the restart.

However, that was not a sign of things to come, as the rest of the match became bogged down in midfield, the two teams content to take a point apiece as they secured spots in the last 16.