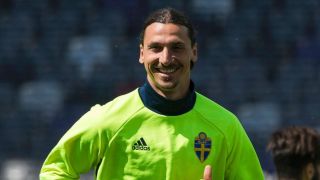 Ibrahimovic finally agreed his switch to Old Trafford on Friday after weeks of speculation, reportedly signing a one-year deal with an option of a further 12 months following the expiry of his Paris Saint-Germain contract.

The 34-year-old Sweden International kept fans and the media alike guessing with his next destination, but it soon became clear that a move to United and a reunion with Jose Mourinho, with whom he worked at Inter, was the obvious choice.

Ibrahimovic stated the decision was an "easy" one to make and says his move will be worth the wait, just as boxing fans were finally appeased when Mayweather and Pacquiao met in the ring in May 2015 after it appeared as though a fight would never materialise.

"I think my decision was pretty easy, it was more to make it possible," he told MUTV.

"I compare it with the Mayweather-Pacquiao fight. [People thought] it would never happen, but it happened.

"I want to say thanks to my team, United, and Jose Mourinho, obviously, because they made it possible.

"My decision was the easiest part. The rest was a puzzle, but the puzzle came together, and we are happy, all of us."

Ibrahimovic also sent a warning to the rest of the Premier League, saying he and manager Mourinho will continue to be successful at United.

"I have great memories [with Mourinho]," Ibrahimovic added. "My only regret with Jose was that I had a short time with him. I had one season.

"I got to know him as a person, not only as a coach, and it's only positive things.He's a winner, I'm a winner, and we both know what we want - we want to win.