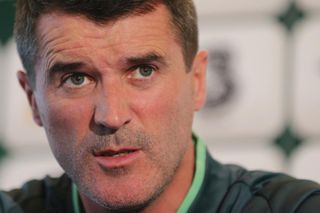 Moyes' exit from Old Trafford was announced by United on Tuesday, less than 12 months after the former Everton boss had agreed a six-year contract as Alex Ferguson's successor.

Keane spent more than a decade with United as a player, winning seven Premier League titles, the UEFA Champions League in 1999 and four FA Cups.

The outspoken 42-year-old feels Moyes was let down and deserved more time to stamp his mark on the club, despite a miserable run of results leaving United seventh in the top flight and guaranteed to miss out on silverware this season.

"I think he should have been given more time and I think some of the players at Man United should be ashamed of themselves. I think they really let him down," said Keane on ITV prior to Tuesday's Champions League tie between Atletico Madrid and Chelsea.

"He certainly had a hard start last summer when he took the job. I think the chief executive (Ed Woodward) didn't get the deals done that he wanted. (There was) a lot of negativity, they had a slow start and they had no momentum.

"To be seventh in the league is disappointing and he (Moyes) will take responsibility for that, but you still need people around you to help you in every way they can and I don't think he's had that support, particularly from the players.

"I think he deserved a bit more time, definitely."

Ferguson had a hand in the appointment of Moyes, but Keane does not believe his former boss can be criticised for the role he played in determining his successor.

"I wouldn't necessarily say he (Moyes) was his (Ferguson's) pick," added Keane.

"He obviously put his name forward, but the club eventually had to make the decision.

"You can't be critical of Alex Ferguson."