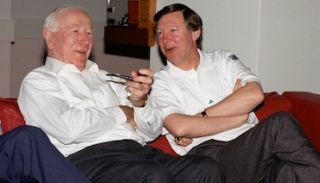 United will strive to ensure that whoever follows Ferguson can keep the club at the peak of the English and European game so they do not suffer the decades of relative failure that followed the messy end of the Busby era 40 years ago.

Busby created the modern United out of the smouldering Second World War bomb wreckage that all but destroyed Old Trafford, then pulled himself and the club through the Munich air disaster that claimed the lives of so many of the Busby Babes in 1958 and eventually achieved glory by winning the European Cup in 1968.

But United rapidly declined after he retired in January 1969 to move upstairs as general manager and then as a director. In 1974 the unthinkable happened when they were relegated.

Six years after becoming champions of Europe, United suffered the humbling experience of playing the likes of Notts County, Oldham Athletic and York City in the second division.

The late George Best, who along with Bobby Charlton and Denis Law, inspired United to greatness in the 1960s, pinpointed the start of the decline as the night Busby achieved his lifelong ambition of winning the European Cup in May 1968.

"For Matt and Bobby Charlton, for Bill Foulkes, for Denis Law... they'd done it. And then they sat back, and you could almost hear the energy and ambition sighing out of the club. It was like being in at the winding up of a great company."

Busby announced his retirement on January 14, 1969 with United sixth from bottom of the old top flight first division.

With his 60th birthday on the horizon, Busby felt his life's work was done and United needed a younger man but there was no immediate successor to replace him.

Don Revie of Leeds United was immediately installed as the bookmaker's favourite to succeed Busby, but Busby did not like his playing methods or tactics.

Sexton, who eventually managed United in the late 1970s, was approached but did not want to quit Chelsea and move north and eventually the job was given to McGuinness, who had been at United first as a player and then a coach for 17 years.

United's results were poor and halfway through the 1970/71 season they had won only five of their 22 league matches.

McGuinness was demoted to reserve team manager three days after Christmas in 1970 and Busby took over again, determined to do the job on a temporary basis until he found the right man.

The former resigned from the club soon afterwards and eventually lost all his hair, which he later explained as the result of the trauma he suffered trying to follow Busby.

The man Busby had in mind to replace McGuinness was his fellow Scot, Jock Stein whose Celtic side had become the first British winners of the European Cup in 1967.

Stein and Busby met secretly in a motorway service station and Stein agreed to take the job, before having second thoughts about working