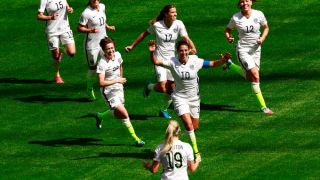 Carli Lloyd led United States to their first Women's World Cup title in 16 years, scoring a hat-trick in a 5-2 thrashing of Japan on Sunday.

Lloyd netted a first-half hat-trick at BC Place in Vancouver as USA clinched their third World Cup title.

It included a remarkable goal from the halfway line as Jill Ellis' team dominated, with Lauren Holiday also scoring as they went 4-0 up inside 16 minutes.

Reigning world champions Japan were left to rue their defending from set-pieces, and USA made them pay early on.

Lloyd led the way and her team were irresistible in the opening stages in Vancouver.

They made an incredible start with four goals in the first 16 minutes, including her hat-trick.

Lloyd struck in the third minute, meeting a Megan Rapinoe corner with a powerful side-footed effort.

It was 2-0 moments later and again from a set-piece, this time Lloyd scrambling in from close range.

USA's impeccable start continued when Holiday volleyed in expertly after a poor clearance in the 14th minute.

Preparing to launch a counter-attack, the midfielder instead opted to shoot from halfway after spotting Ayumi Kaihori off her line.

The goalkeeper scrambled desperately but, as she fell, Kaihori could only get a hand on the shot and see it go in off the post.

If Japan had any hopes of a comeback, they needed to strike at least once before half-time.

They pulled a goal back in the 27th minute through Ogimi, who took a pass from Nahomi Kawasumi before curling a fine effort past Hope Solo.

The comeback continued with Japan's second goal seven minutes into the second half, as Johnston headed past her own keeper Solo to make it 4-2.

But a set-piece would prove to be Japan's undoing once more soon after.

Kaihori could only punch a corner to the back post and Morgan Brian cutback for Heath to strike and seal the win and the title.