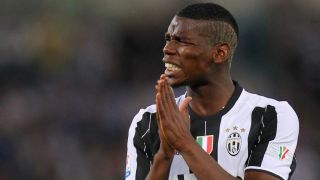 Paul Pogba admits he became annoyed by the delay over his protracted transfer to Manchester United from Juventus.

The 23-year-old finally completed a move back to Old Trafford in the early hours of Tuesday, with Jose Mourinho's side reportedly paying a world-record fee that could rise to as much as £93million.

United's announcement that the deal had been concluded brought to an end a saga that has dominated the transfer window so far, with speculation over the overall fee and the payment to be made to agent Mino Raiola believed to have stalled negotiations.

Pogba concedes that the decision to return to United was far from straightforward, but says the wait to finalise the deal was as frustrating for him as it was for the fans.

Writing in a series of Instagram posts, he said: "It is difficult to explain so much in a few lines but I made a decision guided by my heart and nothing else.

"This transfer took so long because it was a huge decision and involved lots of thinking and work. The wait was as annoying to me as it was to you.

"To all supporters who wrote on my pages about transfer rumours, I have read you all and thank you for the passionate messages. My apologies for not responding before, by law I could not talk.

"Leaving Manchester when I was 18 was a mutual decision between the club and me and the right thing to do at that moment. Now it's time to go back and forward, Old Trafford here I come!

"My deepest respect to the clubs who considered having me. Juventus will always be a part of me and I will always miss, love and be grateful to the club, the team and especially the supporters. I hope you can respect my decision. The most beautiful part of friendship is to understand and be understood."