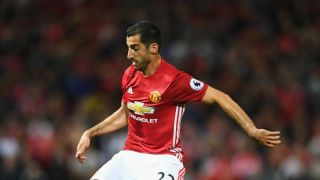 Manchester United's Henrikh Mkhitaryan is a major doubt for next weekend's derby against Manchester City after being ruled out for between seven and 10 days with a thigh injury sustained on international duty.

The Armenia midfielder was hurt in a clash with Marek Suchy during a friendly against Czech Republic on Wednesday, with his side going on to lose the game 3-0.

A statement released by the Armenian FA revealed Mkhitaryan will play no part in their World Cup qualifier against Denmark on Sunday.

The 27-year-old now faces a race against time to feature against City at Old Trafford on September 10.

"As reported, senior national team captain Henrikh Mkhitaryan received an injury against Czech Republic and as a result was unable to continue the match," the statement said.

"Mkhitaryan has had a medical examination in a clinic in Mlada Boleslav. Unfortunately, the results are not encouraging. Mkhitaryan was found to have an injury in the lower third of the left thigh muscle.

"Such injuries usually require a week to 10 days to heal, which means that Mkhitaryan will miss the Denmark-Armenia match on September 4."

Mkhitaryan signed for United from Borussia Dortmund during the transfer window but is yet to start a Premier League game for Jose Mourinho's side.

City will also be without one of their big names for the derby on September 10, as striker Sergio Aguero has been given a three-match ban for elbowing West Ham defender Winston Reid.