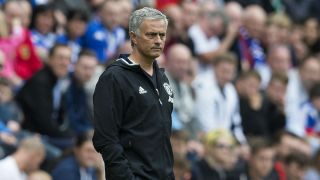 Manchester United began life under Jose Mourinho with a 2-0 success against Wigan Athletic in a friendly at the DW Stadium on Saturday.

Mourinho was appointed at the end of May following Louis van Gaal's departure and is tasked with returning the club to the Premier League summit, as well as delivering Champions League football.

With United missing players who were involved at Euro 2016, the Portuguese fielded two new signings in Eric Bailly and Henrikh Mkhitaryan, while left-back Luke Shaw made his first appearance since breaking his leg in September.

Mkhitaryan and Shaw were two of several players replaced at half-time, with substitutes Will Keane - a former Wigan loanee - and Andreas Pereira netting in the second period.

The first arrived courtesy of a shocking mistake from Wigan goalkeeper Jussi Jaaskelainen, with Pereira adding the second with a smart finish.

It was a routine success against last season's League One champions for Mourinho's men, who will face sterner tests against Borussia Dortmund and Pep Guardiola's Manchester City over the next 10 days.

United displayed the greater attacking intent in the first half and ought to have had a goal to show for their efforts.

In the 25th minute, Mkhitaryan played an inviting low ball for Memphis Depay, who stabbed wide with his right foot when it appeared a left-foot finish was the better option.

It was Mkhitaryan who was wasteful 10 minutes later, leaning back and sending his effort over the bar following good work down the right by Timothy Fosu-Mensah.

Mourinho rang the changes in the second half, making seven alterations and it was two of those who combined for the opening goal in the 49th minute.

Jaaskelainen's terrible pass presented the ball to Juan Mata, who selflessly squared for Keane to tap home into an empty net.

Nine minutes later United were two up as Ander Herrera's shot from Ashley Young's free-kick fell kindly for Pereira, who lashed an unstoppable shot into the top-left corner, before Mourinho's men saw the game out with ease.