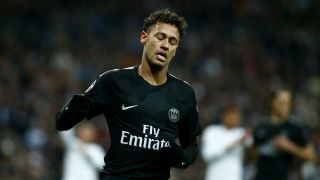 Neymar has come down with illness ahead of Paris Saint-Germain's fixture with Marseille in Ligue 1 this weekend.

The Brazilian - a world-record signing at the start of the season - has been instrumental in PSG's dominance in Ligue 1 this term, although he was sent off in October's 2-2 draw at the Stade Velodrome.

A virus now has Neymar facing a race against time to be available for the reverse fixture against Marseille, having missed training alongside midfield star Marco Verratti, who is suffering from abdominal pain.

"Two players were missing, Verratti and Neymar," Unai Emery told a pre-match news conference on Friday. "[Stanley] Nsoki, with a knock to the knee, was also missing.

"Verratti trained with the physio, as he has from the beginning of the week. He does not feel 100 per cent right.

"Neymar is sick. Lass [Diarra] was sick [on Thursday], a little fever, but he was here today. I hope it will be the same for Neymar."

Injury update: missed training because of a virus is being treated for abdominal pain. felt pain in his right thigh at the end of training.February 23, 2018

Emery insists that his side will be ready for the visit of Marseille, having drawn criticism for their performance in the away fixture.

"They are all aware of the importance of this game," he added. "I think all players are aware it's a different game. In Spain, I watched this game.

"Kylian [Mbappe] is very smart, he is in a process of growing up. Every game is about progress. I believe he is on the right path."