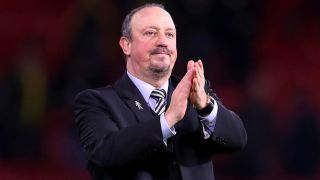 Rafael Benitez chose to take the positives from Newcastle United's 1-1 draw at Watford and refused to talk about his expectations for the upcoming January transfer window.

Newcastle missed the chance to go six points clear of the bottom three as Salomon Rondon's 29th-minute header was cancelled out by one from Abdoulaye Doucoure eight minutes from time.

They now go into Wednesday's clash with Manchester United only four clear of the drop but Benitez, usually more than willing to criticise the club's hierarchy over a lack of transfer activity, chose to focus on his side's response to a 4-0 loss at Liverpool last time out.

Benitez said: "I can be happy because before the game, against a good team, it could be a good result. But I was disappointed with the way we conceded.

5 – Salomón Rondón has scored five goals in his last eight Premier League matches, as many strikes as in his previous 30 games in the competition. Leap. 29 December 2018

Praising Rondon, who has scored in each of his last three away appearances, Benitez added: "Rondon did well and it was a good cross [from Matt Ritchie], but the main thing is his contribution.

"He was holding the ball and linking up well with other players. So there were a lot of positives in a difficult game against a good team."

He told the BBC's Match of the Day: "We started well, started dominating and creating two or three good chances.

"We didn't take them and we know to have the possession is not the same as to have control of the game and that they would wait for the counter. But we believed until the end and we did strike for one goal."