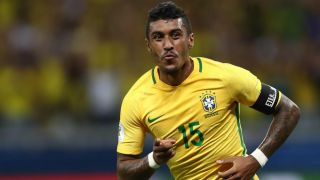 Paulinho scored an unlikely hat-trick and Neymar starred as Brazil extended their winning run and lead atop the World Cup qualifying standings with a 4-1 victory over Uruguay.

In Thursday's top-of-the-table clash in Montevideo, Brazil came out on top in style thanks to a hat-trick from former Tottenham midfielder Paulinho and Neymar's delicious lob.

Edinson Cavani opened the scoring with a ninth-minute penalty - his 40th international goal - but Paulinho restored parity via a stunning long-range strike 10 minutes later before giving Brazil the lead seven minutes into the second half.

Neymar's touch of class 16 minutes from time made it 3-1 and Paulinho sealed the points in stoppage time with his third as Brazil snapped Uruguay's 14-match unbeaten record at home in World Cup qualifiers - dating back to 2009 - while making it eight wins in a row under head coach Tite.

Brazil are now seven points clear of nearest challengers Uruguay after 13 matches in the CONMEBOL section on the road to Russia 2018.

Both Uruguay and Brazil were without their leading forwards for the blockbuster reverse fixture at Estadio Centenario, following last year's 2-2 draw in Recife.

Uruguay's all-time top goalscorer Luis Suarez missed the match through suspension as Cavani led the line for the hosts with the support of Diego Rolan. Experienced goalkeeper Fernando Muslera was also banned and replaced by Martin Silva.

In a somewhat troublesome position for Brazil in recent years, the South American giants were without the services of injured 19-year-old star Gabriel Jesus. While not a like-for-like replacement, Roberto Firmino started up top amid the team's run of six successive qualifying wins.

Brazil should have taken the lead after just four minutes. A strong, surging run from Neymar starting on the halfway line saw Philippe Coutinho played through in the penalty area and a delightful delivery across the six-yard box only needed a touch but Firmino fluffed his lines with an open goal at his mercy.

Uruguay breathed a sigh of relief and then broke the deadlock themselves from the spot in the ninth minute. Alisson - struggling for game time at Roma - conceded a penalty for bringing down Cavani after a careless back pass from Marcelo, who tried to chest the ball down to the goalkeeper. There was only going to be one outcome as Cavani converted emphatically for his sixth goal in five international appearances.

The match continued to live up to the pre-game hype as Brazil drew level thanks to a wonder goal from Paulinho after 19 minutes. The Guangzhou Evergrande Taobao midfielder took one touch before unleashing a rocket of a shot into the top corner of the net.

Neymar was lively throughout the first half, gliding past opponents with ease but it was Uruguay who almost headed into the half-time break with a lead after Matias Vecino's header flashed just wide of the far post.

Brazil stormed out of the blocks in the second half as they claimed the lead in the 52nd minute. Firmino turned and forced Silva into a low diving save from the top of the area but Paulinho was on hand to tuck away the rebound.

At the other end, Cavani came close to levelling proceedings but his free-kick was pushed away by Alisson just past the hour-mark.

And as Uruguay committed numbers forward, they were exposed in defence as Neymar produced a stunning chip over the onrushing Silva before Paulinho completed his three-goal haul late in the game to see Brazil to their fourth consecutive qualifying victory away from home.