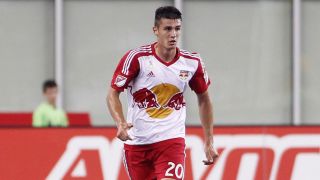 "He [Miazgo] is a promising player," Hiddink told reporters. "We’re not rushing but he will be one of the squad members for the future. [He is a] young guy, stepping up to the national team. You can see what players are capable of in training."

Miazga will leave the New York Red Bulls with less than a year remaining on his current contract. The MLS club decided to sell the 20-year-old now rather than have him leave for nothing next summer.

Guus says Matt Miazga will be a squad player when his deal is finalised and the manager will assess his qualities in training. #CFC

Miazga, who possesses a Polish passport, did not have to obtain a work permit. The transfer fee is reportedly in the $5 million range.

Last month, Goal's Ives Galarcep reported Miazga had interest in heading to Europe instead of playing out the final months of his Red Bulls contract. The center back changed agents last spring, signing with an agency backed by well-known international player advisor Kia Joorabchian.

The Red Bulls tried to re-sign Miazga shortly after the 2015 MLS season began, but he was only just beginning to establish himself as a first-year player. The offers weren't sizable enough to keep him from waiting until after the Under-20 World Cup in May.

The former Red Bulls Academy product has represented the national team on the U-18, U-20 and U-23 levels. He made his senior team debut last November in a World Cup qualifier against St. Vincent and the Grenadines.

Miazga had been in U.S. camp ahead of upcoming friendlies against Iceland and Canada, but he left the team this week to undergo a physical with the Blues, according to ESPNFC.

Miazga began his professional career with the Red Bulls in 2013 after signing a homegrown player deal. He made 38 league and playoff appearances over the past two seasons.