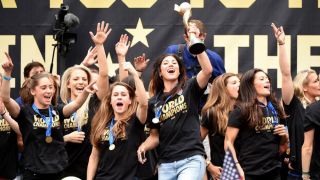 Women's World Cup winners, the United States, were given a heroes' welcome as they began their celebration tour in Los Angeles.

The newly minted world champions took the stage in L.A. to a chorus of "U-S-A" chants and cheers from thousands of fans.

The group of 23 players soaked in the adulation for several minutes as they took photographs from the stage, utilising a background of red, white and blue fans.

Jill Ellis, who has coached the team for just over a year, was the first to take the microphone, calling her team "a remarkable group of women".

"They epitomize what it is to be a team," Ellis said.

Once the microphone was passed to Megan Rapinoe, the festivities reached a new level as she introduced each player on the roster with individual backstories and nicknames.

Then the biggest names from the championship team took their turns thanking the fans and reliving a month they will not soon forget.

"It feels great to be a world champion," Carli Lloyd, the winner of the Golden Ball, said as fans chanted "M-V-P" in front of the stage.

"I'm so proud to call this my team. Every day so far it feels great to wake up a world champion, and that feeling won't get old."

Lloyd led the team offensively with six goals in the tournament and hat-trick in the 5-2 final win over Japan. Abby Wambach, the world's all-time leading goalscorer, thanked Lloyd for her record contribution before recounting what was likely her final World Cup.

"I can't tell you what it's like to be a world champion," Wambach said. "Honestly it hasn't really sunk in. I can't believe it."

Fittingly, the team walked off the stage after leading the crowd in the popular "I believe that we will win" chant and a lively rendition of Queen's "We Are the Champions."

The next stop on the team's tour is New York City.