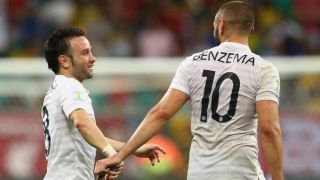 Mathieu Valbuena would have "no problem" playing alongside Karim Benzema despite their joint-involvement in an ongoing blackmail scandal.

Benzema has been accused of blackmail related to a sex tape featuring his France international team-mate Valbuena.

The 28-year-old was arrested for his involvement in the case before then being suspended indefinitely by the France national team.

However, Valbuena said he would be happy to line-up alongside Benzema if the two end up being selected for Euro 2016.

"Of course [I can play with Benzema], anything is possible. There's no problem," he told TF1.

Valbuena was left out of France's most recent squad, but the midfielder is hopeful he can earn a recall from coach Didier Deschamps.

"I spoke with the coach and understood his decision," he said.

"It was a shock at first and I found it hard to accept, but I've come to understand it since then.

"My performances [for Lyon] haven't been bad, but my numbers aren't good.

"If I have a good run for my club, I don't see why I won't return to the France team."