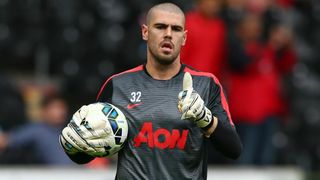 Victor Valdes has thanked the Manchester United "family" for their support as he closes in on a transfer away from Old Trafford.

The 34-year-old has been frozen out by Louis van Gaal this term after a falling-out with the former Netherlands boss.

Valdes has been pushing for a move and Standard Liege are reported to have struck a deal to bring the Spain international to Belgium.

And Valdes, who has always retained the affection of United fans despite making just two Premier League appearances, posted a message on Twitter to express his gratitude to the "@ManUtd family".

"Thank you all for your support during these months of hard work for me, I will never forget! See you soon!" he wrote, along with a picture of United's Carrington training complex.

The former Barcelona goalkeeper has not played under Van Gaal since the final day of the Premier League last season, after his manager claimed he had refused to turn out for reserve matches – something Valdes vehemently denied.