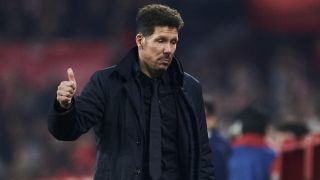 Diego Simeone isn't surprised by Valencia's lofty LaLiga position this season - but hopes his Atletico Madrid side can put a dent in their Champions League dreams.

The Wanda Metropolitano stages the battle between second and third in the table on Sunday, with Atleti holding a six-point cushion over their opponents heading into a crucial fixture for both clubs.

Valencia endured a turbulent 2016/17 campaign, eventually finishing in 12th position for a second successive season after interim manager Voro Gonzalez steered them away from the relegation zone.

However, now under the guidance of Marcelino, they are fighting at the top end of the table and, despite Valencia's 4-1 home loss to Real Madrid last week, Simeone expects a tight game between the top-four contenders.

"I think Valencia plays in a similar way that we do," he told the media.

"They're doing a great job this season, I said it at the beginning of La Liga that we will have to fight with Valencia for a place in the Champions League, they have great players and a great coach that is working really well.

"The two teams are pretty similar but we have nuances that makes us different from each other, we also have a specific idea of what we want from our team."

We had a special guest in the 'Ciudad Deportiva'! Ladies and gentlemen, Roy Keane! at the best from our session February 3, 2018

Atleti are currently the closest challengers to Barcelona, though the runaway leaders boast an 11-point advantage ahead of their derby with Espanyol on Sunday.

Simeone insists he is not interested in talk of catching the current pacesetters in Spain, instead choosing to remain focused on the task of picking up three points and extending the gap to the chasing pack.

"We want to keep it up every Sunday so we can improve in LaLiga and improve as a team."

Diego Costa is back in the squad after overcoming a hamstring injury, leaving Simeone with a selection headache following the 3-0 win over Las Palmas last time out.