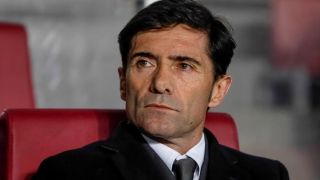 Valencia struck six times in a La Liga away game for just the fourth time in their history in an incredible 6-3 win over Real Betis on Sunday.

Such a high-scoring affair appeared unlikely when Marcelino's Valencia led 4-0 thanks to Santi Mina's 74th-minute goal at Estadio Benito Villamarin.

It took the visitors 35 minutes to open the scoring – through a Geoffrey Kondogbia header – before Goncalo Guedes' 30-yard stunner on the stroke of half-time.

Sergio Leon had a chance to give Betis life, but his penalty 10 minutes into the second half was saved by Neto.

Rodrigo and Mina appeared to seal Valencia's victory, only for the hosts to rally incredibly with three goals in six minutes.

Joel Campbell, on loan at Betis from Arsenal, Antonio Sanabria and former Barcelona attacker Cristian Tello struck to set up a grandstand finish.

It was the first time since a 6-1 win over Malaga in 2004 that Valencia scored six goals in an away league game as they moved into second in the table.