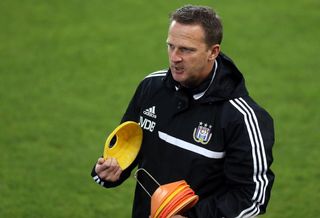 The loss ended Anderlecht's chances of reaching the UEFA Champions League's round of 16, with the Belgian outfit now having won just a solitary point from their five Group C matches.

Chancel Mbemba Mangulu had given Anderlecht the lead, but goals from Nemanja Matic and Nicolas Gaitan fired Benfica in front.

And although Massimo Bruno levelled proceedings with 14 minutes left, Rodrigo struck a late winner for Benfica.

Van den Brom could not fault the efforts of his players though, and refused to blame them afterwards.

"We played to win. Until the last moment we really gave everything, but got nothing fell in place. We continue with empty hands, which is disappointing," he said.

"The pace of the match was at a gigantic high. It was constantly up and down. This requires a huge amount of players.

"The victory was in sight. We go out by small details. At this level, every mistake is punished."