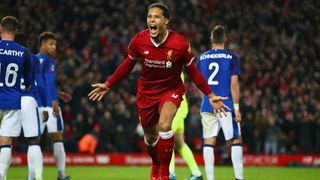 Virgil van Dijk was ecstatic to mark his "dream" Liverpool debut with the winning goal in Friday's FA Cup triumph over rivals Everton.

The world's most expensive defender, who completed his move from Southampton for £75million this month, headed in the winner six minutes from time to settle a fiery Merseyside derby at Anfield.

He had earlier seen a similar chance go begging as he nodded into the arms of Jordan Pickford, but was left beaming with joy at the end as his late intervention made it 2-1.

"What a night," the Dutchman told BBC Sport.

"It was thoroughly deserved, it felt amazing to be out there. The goal is very special for me and my family.

"Playing at Anfield for Liverpool is a dream for every player. To score a goal is even more special."

James Milner, who put the hosts 1-0 up from the spot after Mason Holgate was deemed to have fouled Adam Lallana, was not surprised to see Van Dijk make such an immediate impact.

"It's not an easy game to step into but it's the sort of game Van Dijk came here to play in," said Milner, whose opener was cancelled out by Gylfi Sigurdsson's second-half leveller.

"They had a lot of fans in which was great and made a great atmosphere.

"But that [winner from Van Dijk] is what we expect from him."