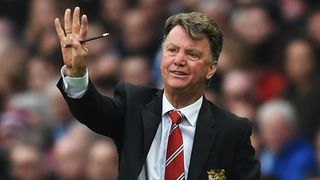 Manchester United manager Louis van Gaal has conceded he is fighting for his job as his side battle for Champions League qualification with eight games to play.

Van Gaal, usually bullish about his future at the club, said he knows that anything less than a top-four finish in the Premier League could cost him his job, adding that the expectation for United managers is to win silverware.

Former United manager Alex Ferguson backed Van Gaal this week and pleaded for more patience to be given to the coach, but the Dutchman admitted he was not sure what the future held for him.

"I cannot say because I think the board have to evaluate after the results of this year what they have to do," he told reporters.

"I think that's normal and I can't predict that when I don't know the facts.

"First you have to see the facts. I have always said that. The results, the titles, and the Champions League ­positions, you can only say that on the 15th of May it is like this or like that.

"I am a rational person. I know a Manchester United manager has to win something, but I am still working on that."

Still, Van Gaal said he was happy to have the backing of Ferguson but said he had received support from a lot of people at the club, including Bobby Charlton who will have the southern stand named after him ahead of the upcoming game against Everton.

"It’s not unique. What is unique is that all the members of the board are always supporting you. That’s ­remarkable."

That support might turn if United fail to make the top four or win the FA Cup.

Van Gaal's men are sixth, just one point off fourth-placed Manchester City and level with West Ham, who United will take on in an FA Cup quarter-final replay later this month.