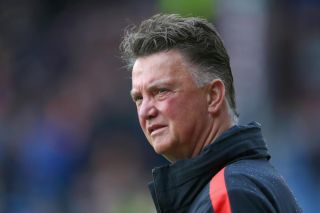 United have yet to win a competitive game under the former Netherlands coach and could have few complaints about Saturday's result at Turf Moor.

Although Van Gaal's men were unfortunate not to be awarded a late penalty when a shot from Ashley Young appeared to be handled by Burnley substitute Ashley Barnes, the hosts were good value for a share of the spoils having created a number of opportunities of their own.

Reflecting on a third-successive Premier League game without victory, Van Gaal told BT Sport: "I don't think we give a lot away, but we have to create more chances and today I think we have created chances to score.

"I think we were the stronger team, certainly in the second half.

"Of course the progress is there, but you have to win. A club as [big as] Manchester United have to win.

"When you have two points [out] of [a possible] nine... that is disappointing."

While declining to comment on two penalty appeals for his side, Young having also gone down under a challenge from Kieran Trippier in the first half, Van Gaal did question the performance of referee Chris Foy.

"I think a manager don't have to discuss these issues [the penalty claims]," added the Dutchman.

"You have to see the match and I think we have a lot of free-kicks against us, and I'm certain we have more ball possession, so how is that possible?"

Van Gaal was able to express optimism over the likely availability of new signing Marcos Rojo, who was unable to join Di Maria in the United line-up at Burnley as he awaits a work permit.

"I believe when we play against Queens Park Rangers [after the international break], Rojo shall have a permit," Van Gaal stated.