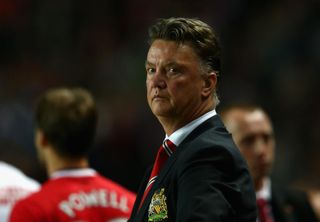 The quality of United's squad has come into question in recent times, with their start to the 2014-15 campaign only serving to fuel those doubts.

Tuesday's 4-0 League Cup thumping at the hands of third-tier MK Dons came on the back of a 2-1 defeat to Swansea City and a 1-1 draw at Sunderland in the Premier League, leaving Van Gaal searching for his first competitive win as United manager.

The Old Trafford club smashed the British transfer record earlier this week in signing Angel di Maria from Real Madrid for £59.7 million but, speaking at the Argentina international's unveiling on Thursday, Van Gaal indicated their spending will not stop there.

"The club will [announce] when the time's there," said the Dutchman. "Players will leave, others will come."

Di Maria became United's fourth signing of the window, after the arrivals of Luke Shaw, Ander Herrera and Marcos Rojo.

The likes of Javier Hernandez, Marouane Fellaini and Wilfried Zaha have all been linked with moves away from Old Trafford as Van Gaal looks to rebuild the squad in a bid to challenge for trophies once again.