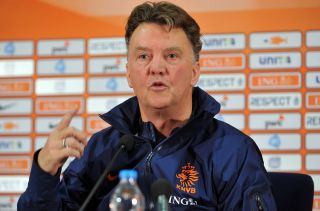 Goals from Wesley Sneijder and Arjen Robben were enough to seal a well-earned 2-0 victory in Istanbul, as the Dutch rounded off a successful campaign with a ninth win from their 10 matches.

And Van Gaal was quick to praise his side's performance, telling SBS6: "I am proud of my team.

"There are not many teams that come here and find it easy. I just wish that we had scored more, especially after the break."

Van Gaal was, however, critical of Portuguese referee Olegario Benquerenca.

"Despite the referee we stayed on our feet," he added.  "I had to make changes because of yellow cards for offences that were not.

"I thought the referee had a bad performance. He gave a lot to Turkey but not much to us."

The former Barcelona boss has overseen an unbeaten passage to the finals in Brazil next year, and he is positive about the future following his side's showings in Group D.

"We are clearly on the right track," he continued. "We have made progress in possession and that is reflected in the result."