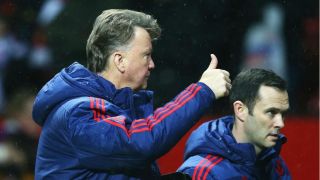 Manchester United manager Louis van Gaal praised his players for the way they coped with his "risky" tactics in a 2-1 victory over Swansea City.

United were looking to avoid a fourth consecutive 2-1 Premier League defeat to the Welsh club, and were made to fight for their first win in nine matches after throwing away a one-goal advantage.

Anthony Martial headed the hosts in front at Old Trafford shortly after half-time, before Gylfi Sigurdsson - scorer of the winner in the same fixture last season - restored parity.

However, Wayne Rooney's first Premier League goal since October - a sublime flicked finish - settled matters, easing some of the pressure that has been building on Van Gaal in recent weeks.

"I think that we played a very risky system against Swansea City because they had a shape with four midfielders and wingers and we played with three defenders and that's risky," he said.

"We played with three defenders but we did very well and created a lot of chances. We didn't score, though, and that's our problem.

"When we scored, there was not a problem any more. We scored two beautiful goals.

"I am very happy for the players because they had to play under big pressure and now we have won. We are still near the top of the league and the gap is less.

"So that's football. That's a season. A season takes eight months or something like that and not one month.

"I hope this is a fantastic starting point for us in the new year and we can continue against Sheffield United [in the FA Cup next weekend]."

"They had a lot of space behind them and when the full-backs are running in that space they have to follow. But we were mostly in attack," he added.