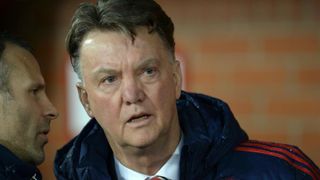 Manchester United manager Louis van Gaal played down a January move for Felipe Anderson, with the club unlikely to dip into the transfer market.

Felipe Anderson has emerged as United's top transfer target this month after he was linked with a move to Old Trafford during the off-season, and the Brazilian midfielder refused to rule out a January switch on Saturday.

The 22-year-old, who scored in Lazio's 3-1 win over Fiorentina, admitted he was unsure if he will stay in Rome.

Van Gaal was quizzed about Felipe Anderson following United's unconvincing 1-0 victory against Sheffield United in the FA Cup and said: "I cannot discuss that with you. I don't think we shall do business in January.

"But you cannot say that because when there is a chance to make the selection better, we shall do it, but I don't think we shall do that. But that is this moment."

Felipe Anderson - the subject of a failed United bid in August according to Lazio director Igli Tare - has scored six goals in all competitions for the Italian capital club this season, with five of those coming in Serie A.