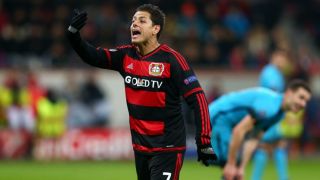 Javier Hernandez insists Louis van Gaal's decision to phase him out of the Manchester United set-up was "nothing personal".

The Mexico international was sold to Bayer Leverkusen last August after failing to cement his place in the Dutchman's plans at Old Trafford, having spent much of the previous season on loan at Real Madrid.

Hernandez has scored 19 goals in an impressive campaign in Germany so far, while United's laboured attack has yielded just 10 goals in their last 11 fixtures.

The 27-year-old admits he is happy to hear suggestions that he was allowed to leave too early but says he holds no grudge over Van Gaal's decision to offload him.

"It's part of the game, only 11 players can start. It was nothing personal but every coach has his own plan," he told Bild.

"When people criticise Van Gaal, that's their opinion. I'm pleased that people think I could have stayed there longer. I had four great years in Manchester, I was champion twice."

Hernandez, linked with Arsenal earlier this year, would not rule out the prospect of moving on from Bayer Leverkusen in future, though he stressed he is enjoying life at the club.

"We'll see, you never know what will happen. For the last two or three years I've played for Manchester United, Real Madrid and now Leverkusen," he said.

"In this sport, it doesn't matter if you sign for 10, 12 years or if you extend by one season every year. Everything can change after six months.

"I'm happy to be at this great club. My goal is now to play a very good second half of the season.

"I want to finish in the top four. We want to go as far as we can in the Europa League and the Pokal. You have to think about the maximum in any competition you're in.

"The goal must always be the final, and then to win it."

Hernandez has also praised the team spirit within Rodger Schmidt's camp, adding: "It's not only on the pitch. We have good cohesion here, there are a lot of young players. Ninety per cent of them speak English and that for me is a great help.

"It's been much better for us in recent games - we need to continue that in the second half of the season."