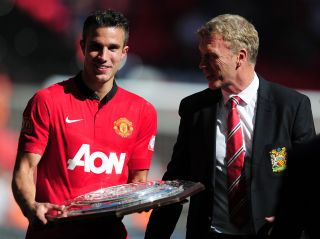 Reports emerging in England on Wednesday claimed the Dutchman was already missing the presence of Alex Ferguson, and had already begun to question Moyes' training ground methods.

But Van Persie has dismissed those suggestions out of hand, claiming he is enjoying working alongside the former Everton boss.

"We work well with David Moyes. He has his own approach and methods and that is fine by me," he said.

"Everyone is working hard. The (pre-season) preparation in Australia and Asia will pay dividends and there is a great atmosphere among the squad.

"Moyes has his own style but I am happy with it. He takes care of training, prepares us well to face each opponent and all the players are sharp.

"Fortunately, last season's title win has also given us even more hunger."

But the 29-year-old has drawn a blank in his last two outings as the Old Trafford outfit have drawn with Chelsea and suffered a 1-0 defeat to Liverpool.