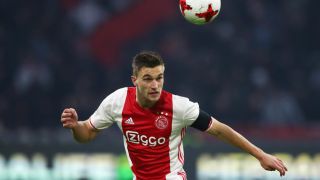 Joel Veltman is ready to leave Ajax amid speculation linking him with a move to Premier League runners-up Tottenham.

The defender's contract with Ajax is due to expire in 2018 and the Europa League beaten finalists are keen to hold on to the 25-year-old for two additional seasons.

Veltman is considering his options, though, with Spurs reportedly keeping a close eye on his situation.

"I have spoken with my agent, but he is unaware of any interest from Tottenham. Vincent Janssen was joking that we will become team-mates, but there is nothing to it as of yet," Veltman told VI.

"I have one year left on my current contract, so normally I will either renew or be sold. That is only logical. There will be clarity after my holiday. But a transfer is a bigger option than before.

"Ajax's offer to renew is a nice gesture, they want me to stay. But this could be the moment for me to look at other options.

"But the right club will have to come along. There is nothing concrete for now, but I am not in a rush."