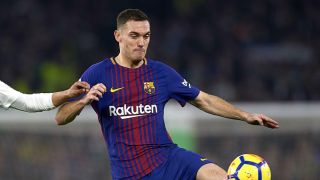 Thomas Vermaelen will miss Barcelona 's final game of the LaLiga season against Real Sociedad next weekend with a hamstring injury.

The centre-back suffered the setback during Sunday's match at Levante, where an astonishing 5-4 defeat ended Barca's hopes of an unbeaten top-flight campaign at the penultimate hurdle.

Barcelona did not give a timeframe on Vermaelen's estimated return date following tests on Monday and his condition will be a concern for Belgium head coach Roberto Martinez.

[INJURY NEWS] has a hamstring injury in his right leg. More tests needed to find out the extent of the injury. May 13, 2018