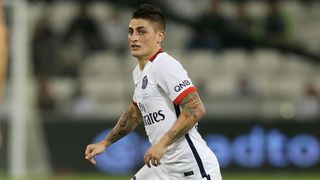 Marco Verratti has reached an agreement with Paris Saint-Germain over a new, long-term contract.

Manchester United and Real Madrid have been linked with moves for Verratti, who joined PSG from Pescara in 2012 and has since blossomed into one of Europe's top-rated playmakers.

The 23-year-old's existing contract is due to expire in June 2019 but his agent has revealed it is only a matter of time before he will ink a renewal.

"It is only a matter of putting it down on paper. Marco will stay with PSG for a long time, at least until 2020.

"This is already the fourth time he has signed a contract renewal [since joining PSG]. He now has to show again that he is worth his wages."

Verratti recently revealed his desire to work with future Bayern Munich coach Carlo Ancelotti again and Di Campli believes a transfer to the Bundesliga champions at some stage in the future is more likely than a move to either Barcelona or Madrid.

"It would be less complicated for Marco to play for Bayern one day than to join Madrid or Barcelona," he added.

"Both Spanish sides have too many ties with Qatar to do something that could upset PSG."