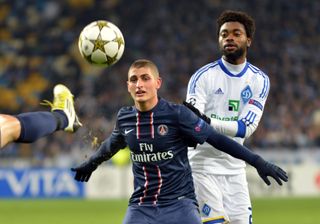 The Italian had been linked with a move away from the Ligue 1 champions, with Serie A duo Napoli and Fiorentina both mooted as potential destinations should he secure an exit.

However, he has elected to extend his stay at Parc des Princes until June 2018.

Verratti began his career with Pescara in Italy's second tier but made the big-money switch to PSG in July 2012 after helping them secure promotion to Serie A.

He went on to make 27 appearances in the French top flight in 2012-13, as the Paris outfit ended their 19-year title drought.

Verratti earned his maiden call-up to the Italian national team following his breakthrough season with Pescara.

And he has since made four appearances for Cesare Prandelli's side, scoring one goal.