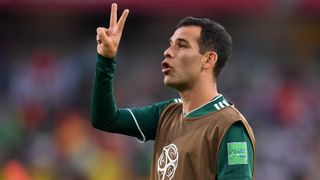 Osorio has made two changes from the side that began the 3-0 loss to Sweden in Group F last time out, one of which was enforced, with Hector Moreno serving a suspension.

Miguel Layun is the other man to make way, as Marquez and Hugo Ayala come into the side for Monday's clash in Samara.

Playing at his fifth World Cup, Marquez came on as a second-half substitute during the wins over Germany and South Korea, but played no part against Sweden.

Last year, the Mexican Football Federation offered its support to the team's former captain after he was sanctioned by the United States Department of the Treasury for his alleged support of a drug trafficking organisation.

The Brazil XI is as expected, with, as Tite confirmed on Sunday, Filipe Luis starting at left-back ahead of Marcelo, who has been suffering from a back problem.