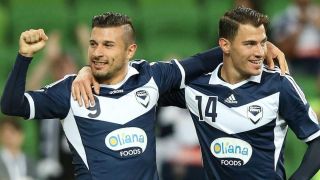 The A-League side took an early lead through Kosta Barbarouses in the Group G clash at AAMI Park and the New Zealand international was denied a second goal due to a questionable offside decision mid-way through the second half.

The Japanese visitors, last season's Emperor's Cup winners, enjoyed plenty of possession and carved out numerous openings, but couldn't find a way past Lawrence Thomas in the Victory goal, and, with just one point from three games played in the group stage, now appear destined to bow out of the competition.

A Victory side much changed from their 2-1 win away to Perth Glory on Saturday night struggled to get the ball off the visitors in the opening exchanges, but it was the hosts who opened the scoring in the 10th minute, against the run of play.

Sharp work from Rashid Mahazi and Archie Thompson saw the home side win possession near the half-way line, catching the Marinos back-line exposed.

Jimmy Jeggo fed Barbarouses with a well-weighted through-ball, and although Tetsuya Enomoto got a touch, the goalkeeper could not prevent the New Zealand international's low finish from squirming underneath his body and into the back of the net.

Marinos continued to dominate possession but struggled to create any clear-cut opportunities. Manabu Saito's pace and directness provided a threat with and without the ball at his feet and on one occasion Pablo Contreras appeared to use his arm inside the area to clear from the lively forward's cutback.

As the half wore on, Yuta Mikado fired over the crossbar and Yuta Narawa's dangerous delivery into the penalty area narrowly failed to find a team-mate, but that was as close as the visitors came to forcing an equaliser.

Victory meanwhile narrowly failed to extend their lead in first-half injury time, Barbarouses shooting just wide of the post after advancing into the area and cutting inside during a swift counter-attack.

The second half picked up where the first left off, with Yokohama dictating terms. They were inches away from equalising in the 54th minute, when substitute Jungo Fujimoto hit the bar with a dipping free-kick.

A succession of warning shots ensued, including a long-range Saito effort which Lawrence Thomas spilled, before reacting quickly to smother the rebound.

Victory had the ball in the back of the net in the 74th minute, only for Barbarouses' tap in to be ruled out for offside. Kevin Muscat's team continued to ride their luck at the other end, with Thomas almost wrong-footed when a scuffed shot took a deflection off Contreras.

With seven minutes to go, Fujimoto went agonisingly close to poking home another long-range shot from Saito. It was the hosts who had the last best chance of the game, substitute Tom Rogic bending an attempt just beyond the far post in injury time.

Moments later, Babarouses was again denied a goal with the ball in the back of the net, flagged offside after following up another good Rogic shot.

Ultimately one goal proved enough, and Victory will now prepare for their away match against the same opponents on April 2 with some degree of optimism, while Marinos will consider themselves somewhat unfortunate, as they see their hopes of progressing from the group dwindle.