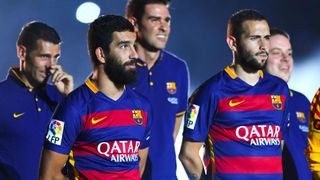 Arda joined Barca from Atletico Madrid ahead of the 2015-16 campaign, while Vidal made his way to Camp Nou from Sevilla, but the Catalans' transfer ban has prevented either from playing so far this season.

The duo were registered on Monday, though, and are now raring to go after spending the first half of the season on the sidelines.

"Arda and Vidal will both be involved on Wednesday," Luis Enrique said at a news conference. "I do not know yet how many minutes they will play, but they are both in great shape and excited to make their debut.

"They are both very versatile players who could play in a number of positions. Aleix can play as a wing-back, a winger and even in midfield. They are both more than capable of doing well. They have remarkable individual quality and can give us a lot defensively as well."

The Barcelona coach also had his say on Neymar's performances this season and hailed the progress the Brazil captain has made since his arrival at Camp Nou in 2013.

"He was still very young when he arrived at Barcelona, but he has made a lot of progress and has developed incredibly fast."