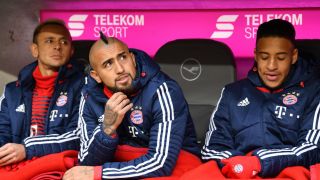 Leon Goretzka's arrival at Bayern Munich next season does not mean Arturo Vidal will leave the Allianz Arena, according to Jupp Heynckes.

Goretzka's switch from Schalke was finally confirmed last week, the 22-year-old agreeing a free transfer to Bayern when his current deal expires in June.

A lot is expected of the Germany international when he makes the move, the midfielder having impressed as Schalke have surged into Champions League contention in the Bundesliga.

The signing of Goretzka has led to some suggesting Vidal could be the one to lose out but the Chile international remains an integral part of Bayern's squad.

"Arturo Vidal has a contract until 2019," said Heynckes. "For me he is a fundamental player in our team.

"My opinion is that he is very important. I consider him a fantastic footballer. The player has to decide if he wants to stay here, and the club too."