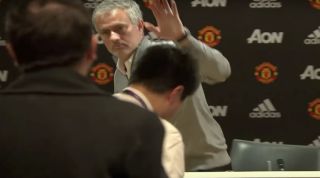 Goals from Paul Pogba and debutant Harry Jessop were enough to see off a disappointing Palace side at Old Trafford in United's final game of the Premier League season.

Despite victory, United finished the season in sixth place, meaning they must secure a win against Ajax in the Europa League final on Wednesday evening if they are to play Champions League football in the 2017/18 campaign. Perhaps that's why Jose Mourinho wanted to divert his attention to the game ahead so quickly.

As his players and staff did a lap of honour around the pitch, Mourinho decided to crack on with the post-match press conference as soon as possible.

With most of the journalists still watching proceedings on the pitch, Mourinho entered the press room and asked the small handful of reporters in the room if there were any questions for him before walking out.

"Is that it?" One man asked. Unfortunately yes, yes it was.