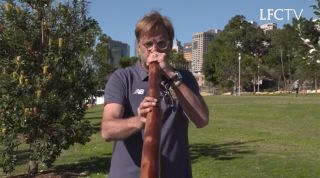 The Premier League season only finished on Sunday, with Liverpool securing Champions League qualification after beating Middlesbrough 3-0 to seal third place in the Premier League.

Yet the Reds have already been heavily involved in post-season activities as they flew Down Under on Monday and beat Sydney FC 3-0 in a friendly on Wednesday evening.

It appears Jurgen Klopp and the players have been trying to make the most of their time in the city, as the boss got to grips with a bit of the local culture. Traditional dancing, playing the didgeridoo, chucking a boomerang and spear throwing all made the 49-year-old German's list of activities.

As you'd expect from the flamboyant Liverpool coach, he didn't hold back as he embraced each of the cultural trials laid out in front of him at Walumil Lawn, next to the iconic Sydney Harbour Bridge.

The Liverpool contingent are now flying back to England as a series of international fixtures await many of the squad.