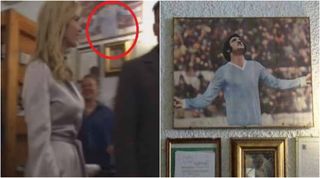 The Italian striker was one of Lazio's greatest ever forwards.

Having started off in Wales at Swansea (of course), Chinaglia proved himself in Italy's lower divisions before going on to score 98 goals in 209 appearances for Lazio where he became a legend.

Chinaglia, who died aged 65 in 2012, was a charismatic footballer who was well liked – but his way of life off the pitch led to some scrapes with the law.

After leaving Lazio, he enjoyed a successful time at New York Cosmos alongside Pele on the pitch, despite polarising opinions off it.

Even with his reported off-field troubles he was still a Lazio idol, and that could not be better reflected than in the framed photos of him across Rome.

That includes Luigina Pantalone's restaurant "Le cave di Sant’Ignazio", the eatery that Ivanka Trump and husband Jared Krushner went to dine at during her trip with father Donald to see the Pope this week.

The President's daughter saw the Chinaglia photo and, according to the owner, asked: "Which saint is he?" to which Pantalone replied: "He is not a saint, but a great champion of Lazio."