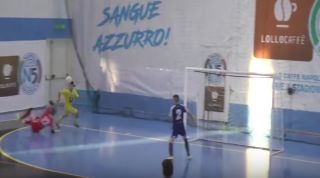 Amarchande, who used to play for Benfica, scored the type of goal that futsal dreams are made of in the Italian top flight.

The Partonopei's No.3 picked the ball up around the halfway line, beat one defender with an elastico, then effortlessly rolled the ball past the same player and his team-mate.

As the goalkeeper came out to meet him, the 19-year-old Amarchande flicked the ball over his floored opponent before smashing a shot into the net on the half-volley.